The Roman legacy is very present in this territory. At every step, the rich heritage inherited from the presence of Rome in these lands emerges in combination with outstanding natural and landscape values. The pleasant journey that brings us closer to these corners, reviving the historical itineraries through the O Xurés mountain range, which leads from Portugal to Celanova.

Included in the “Itinerarium Antonini” with the mention of ” Item alio itinere a Bracara Asturica”, the Via XVIII or New Way was ordered to be built between 79 and 80 A.D. by the legacy of the province C. Calpetanus Rantius Quirinalis Velerius Festus, during the mandate of Domitian and his son Titus. Its purpose, to unite the important cities of Bracara Augusta (Braga) and Asturica Augusta (Astorga), with a total of two hundred and fifteen miles away, about 300 km. In Via Nueva, he went into Galicia crossing the lands of Bato in Portugal through the place of “Portela del Home” in the Town Hall of Lobios and continued his route through the Town Hall of Bande towards Sainza (Calvos de Randín).

The state program of Natural Ways recovered part of the route of the Via XVIII turning it into a trekking route that can also be cycled or even used on horseback.

The Roman roads were marked by milestones, stone cylinders between two and four metres high and about 50-80 cm in diameter, which were driven into the edges of the road, the same as the modern mileposts on today’s roads. Every thousand Roman “passum”, one mile (1,481 m), but on the Via Nuova, studies confirm that the miles vary between approximately 1,480 and 1,850 meters.

About 300 milliards were discovered across the Via Nova, the largest amount of remains of any road in the Roman Empire. Many of them have been taken away from their original place and reused in walls of kneeling stones, houses, alpendres and other constructions. One of the largest concentrations appears precisely in Portela del Home (Lobios).

In this mansio, the current excavations let us distinguish what was a kitchen and the thermal area. It also has a hypocaust, a heating system that circulated hot air through channels under the floor, used mainly in the Empire’s thermal baths.

The “corgas” are streams of water coming down from the mountains. In the territory “corga” is a term widely used, being numerous examples of streams that fall through the granite walls of the mountains of O Xurés.

The Fecha is a small stream affluent of the river Caldo. Fecha means “stream” so Corga da Fecha comes to designate something like “stream water course”. In turn it receives water from other corgas like Carballón, Curro or Revolta. This confluence of mountain waters has seasonal singularity, being the winter and the spring the moment of greater spectacularity by the increase of volume.

A Corga da Fecha is striking. More than two hundred metres of unevenness make it one of the main waterfalls in Galicia. Several steps in the rock let the water fall to the next level in a succession of chained waterfalls.

A unique thermal complex on the banks of the Caldo River, which was already used by the Romans for its contrast between cold and hot waters. A river walk near the Lobios Spa invites you to take a stroll.

It is an archaeological site that exemplifies the importance of the Roman legacy in the area. Located in Porto Quintela on the banks of the Limia River, it is a military camp with a rectangular floor plan and thick walls. Two of the entrances are recovered as well as the headquarters or Principia.

It has a series of walls, interior roads and drainage channels, although part of the site was covered by the waters of the As Conchas reservoir (built in 1949). The excavations show an occupation of about fifty years (79 A.D. – 120 A.D.). Its position in the middle of the Via Nova seems to indicate that it acted as a base for operations on this important artery. The complex also has a mansio, (a construction linked to the road aspect and which served as a resting place) and some thermal baths. A modern interpretation centre allows a better knowledge of the site which is freely accessible.

This is a Castro archaeological site, one of the best examples of Castro culture in the northwest of the peninsula. Located on a mountain at 732m. altitude, it was inhabited from the 6th century BC to the 2nd century AD by the Celtic tribe of the Coelerni.

In the archaeological excavations carried out in Castromao, extraordinary objects have been obtained, such as the fretworked trisquel of Castromao (1st century B.C. – 1st century A.D.), the zoomorphic figure, the coin treasure (63 dinars and 1 gold) from the republican and imperial period, or the Tabula de hospitalidad, which has allowed Castromao to be identified with the civitas of the Coelnos, Coeliobriga.

When the Via Nova XVIII passed through the camp of Aquis Querquennis and reached Celanova, a branch was divided and went into the area where the remains of the Romanized fort of Castromao exist. Then it went to the valley of the Arnoia, towards Ourense and then to Lugo. The importance of this possible branch is attested by the existence of one of the Roman bridges in Galicia par excellence, the Ponte Freixo. To wade the Arnoia River the Romans built a large bridge with four arches.

The Roman imprint on this bridge is spectacular: padded ashlars at its bases, semicircular arches, a horizontal level, an acceptable width of the road, cutwaters and an endless number of marks in the “opus cuadratum” that inform us of its safe Roman past. 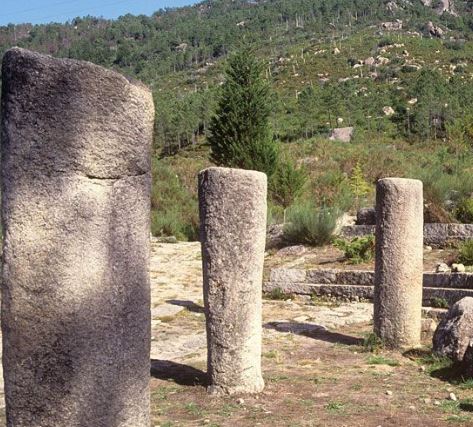